11 Canadian Desserts You Must Try In This Lifetime

Desserts have been around for a long time. There has always been a group of people that could not live without having something sweet. New recipes are always emerging; these are either better versions of the old or just some good old classics. Moreover, there are numerous desserts that celebrate different countries and cultures.

Today, we are going to look at some must-try Canadian desserts that are definitely a sweet lover’s dream. Whether you are Canadian or not, these desserts will definitely make their way into your cookbook! Let us delve straight into it!

Nanaimo bars were named after the Nanaimo city in Canada, as they were made there for the first time. The best part about these delicious bars is that they do not need to be baked at all. This is definitely one of our most favourite desserts. This triple layer dessert consists of a base layer of crushed Graham crackers with custard on top. The final and third layer is a coating of ganache on top. The yellow custard is thick and creamy while the base is a delicious mix of Graham crackers, coconut and chocolate.

It is popularly believed that this recipe was first created in 1953. However, some locals claim their grandmothers were already whipping up this delicious dessert long before that. Throughout the years, people improvised and a variety of flavours came into being. These include mocha, red velvet, mint and even peanut butter. Not only this, people also started creating lattes, spring rolls, ice creams and even cupcakes.

There is actually an area within the city of Nanaimo known as the Nanaimo Bar Trail. Here you can taste 39 different recipes. These include classics, new versions and even beverages.

Butter tarts are super popular, especially along the East Coast of Canada. These are usually small enough to fit in the palms of your hands. A good amount of maple syrup is what actually helps sweeten them. Their popularity can be noted by the amount of events dedicated to this dessert. There are numerous festivals, trails, tours and even bake-offs specifically organised each year in honour of butter tarts.

People adore butter tarts because of their reflection of Canada’s history and culture. These tarts have also been further improvised and are now available in various forms. Some of these include ice creams, cupcakes and frosting. It is believed the recipe was initially published in 1900. However, the original creation dates back to the 1700’s.

A flapper pie is yet another tasty Canadian dessert you simply cannot ignore.

The base is made of Graham crackers which are baked to achieve a crispy crust. This base, in the shape of a pie crust is then filled up with creamy custard and finished off with fluffed up meringue. This final layer is blowtorch to give a crispy, caramel burn to the meringue.

This dessert’s exact origins are unknown, but lie somewhere in the prairies of Alberta, Saskatchewan and Manitoba. Farms here offered these as sweet treats all year round as the recipe was not based on ingredients that were only available in a particular season. It is believed that the name flapper was given to the pie taking after the flappers women wore in the 1920’s. Some others believe that the pie was so quick to make that the term flapper was awarded to it. Nonetheless, the pie tastes incredible and delicious no matter which story you believe in.

In the past, French settlers had lived in the Atlantic regions of Canada. They lived cooking blueberries which were abundantly present in the region. Therefore, the blueberry grunt is a Maritime classic. 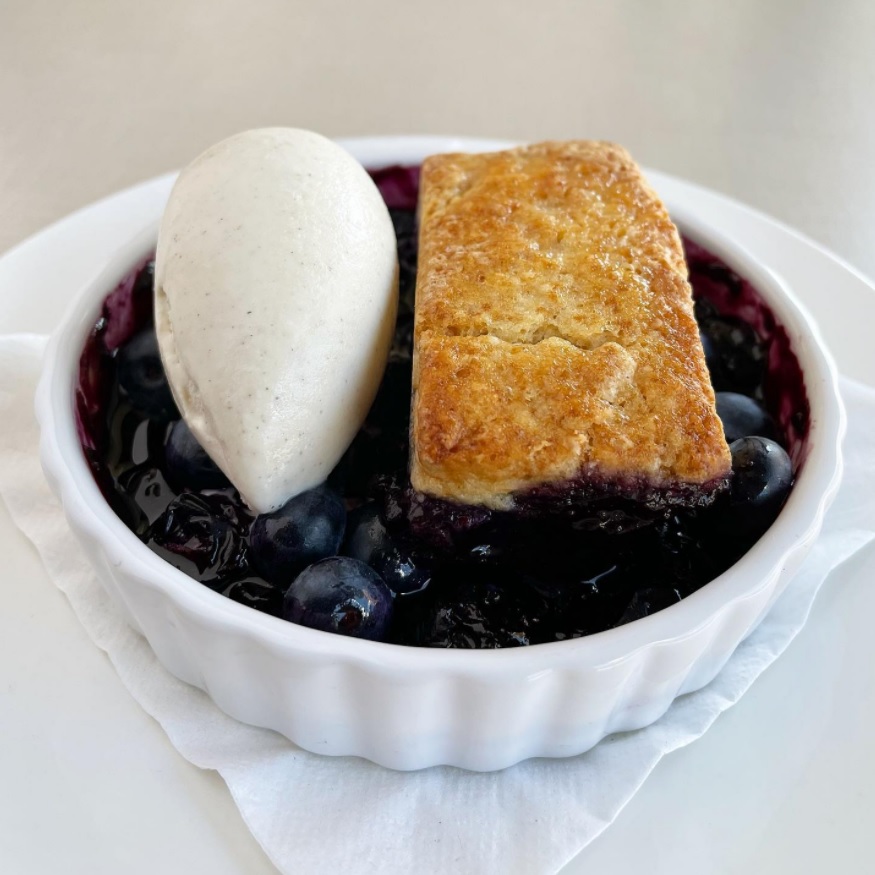 The word ‘grunt’ refers to the sound that arises from boiling and bubbling blueberries. The resulting sauce was topped off with biscuits or dumplings to create the dessert.

People tell stories of the Prince of Wales Fort enjoying this delicious treat. This was back in the 1700’s in and around Hudson Bay. Even today, regular people cannot say no to this yummy recipe. It is easily available in numerous cafés and restaurants all across Canada. Some of these might even come with an added scoop of vanilla ice cream!

Do not get thrown off by the odd name of this dessert. This dessert has a French name that simply means ‘unemployed man pudding’. Female factory workers came up with the recipe during the Great Depression. These women worked in Quebec which is why this popular dessert is also sometimes referred to as the ‘poor man’s pudding’.

The recipe is really pretty simple. Cake batter is dashed with hot caramel before baking. This seeps through and ends up at the base. After baking, you are left with an upside-down cake. The texture is gooey and the final result is often topped with maple syrup. This dessert became a part of the French-Canadian traditions due to its  rich flavour and superb taste.

Recent studies have shown that these berries are actually very good for health. These contain a good amount of antioxidants which can benefit the body in numerous ways. The berries ripen and are ready to eat in June and July. However, the Saskatoon Berry Pie can be indulged in throughout the year!

The Tiger tail ice cream is not as popular as other Canadian desserts and is mainly sought after due to the nostalgia it brings with it. It was actually very popular and loved in the years between 1950 and 1970. Today, it is only mostly sold by huge ice cream parlours like Kawartha Dairy and Loblaws. The ribbons in this ice cream are what give this unique dessert their name. It is actually an orange ice cream with black stripes of liquorice similar to a tiger’s.

Tarte au sucre is another dessert that became part of Canadian culture due to French settlers in Quebec. The people back then used maple syrup instead of brown sugar due to its rarity. The main ingredients of this recipe include an egg, flour, butter, heavy cream and maple syrup.

This recipe is a sweet twist to regular sugar-cream pies. These pies are a must have item during the holiday season but you can indulge in them all year round as well.

Beavers are one of the national animals of Canada and this dessert is named after the similarity to a beaver’s tail. The dough for this dessert is hand stretched and fried once it looks like a tail. It is eventually topped off with cinnamon sugar which gives it its sweetness.

The dessert has been popular in Canada for nearly 40 years and was first trademarked in 1978. This was done by Grant and Pam Hooker from Ontario. President Obama also made a special visit to get his hands on this treat in 2009 during an official visit. Today, you can get these desserts topped with lemon, cheese, lobster, maple butter and even Nutella!

Sweet Bannock is considered a revered comfort food among many Canadians. The bread is fried or cooked on a griddle. This griddle was called the Bannock Stone and hence the name of the dish. The main ingredient of this bread is corn flour or other plant flours.

Other ingredients include water, lard, salt and other ingredients of preference. This bread became popular because it was simple to make and could be whipped up in very difficult conditions as well. Once fried, it is sweetened using cinnamon sugar or can be turned into bread pudding. These outings topped off with sweet berries help achieve excellent taste.

Figgy Duff is actually a pudding. It has a bread texture and it gets its sweet flavour from plump, flavorful raisins. The best part is that the leftovers are further used to create even more wonderful recipes. Many people love to top it up with maple syrup and a variety of fruit to enhance the flavour.

You will be surprised to know that this dessert can further be fried in a pan to achieve crispy toast. This is a very lively recipe and can be indulged in at any time of the year and any part of the day!

We hope you loved our list! Some of these are so simple to make, you could easily whip them up at home and impress guests coming over. If you plan on a trip to Canada, make sure you try out these local favourites because they certainly are a treat!